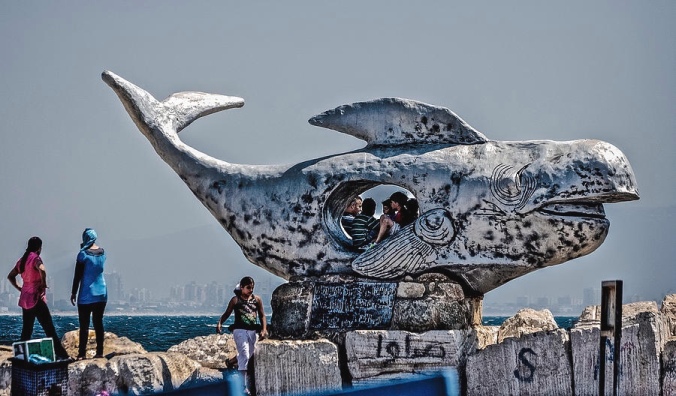 Jonah & The Whale Sculpture in Israel

I know, I know, I know. I promised more updates, and more updates were planned. I took an unplanned step back from social media and other internet things to deal with some real-life things which I will probably write about in time. I’ve been reading Job and some of the minor prophets and have found great encouragement, and wanted to start writing about that first.

First: Jonah. I actually read the book of Jonah a few months ago, but my Bible happened to fall open to those pages a day or so ago and I was reminded of my observations, which perhaps aren’t super new but, honestly? I kind of had to laugh when I read chapter 4 (bear with me here), after Jonah sees that God averted disaster for Nineveh because of its earnest repentance:

But to Jonah it seemed very wrong, and he became angry. He prayed to the Lord, “Isn’t this what I said, Lord, when I was still at home? That is what I tried to forestall by fleeing to Tarshish. I knew that you are a gracious and compassionate God, slow to anger and abounding in love, a God who relents from sending calamity. Now, Lord, take away my life, for it is better for me to die than to live.”

But the Lord replied, “Is it right for you to be angry?”

Jonah had gone out and sat down at a place east of the city. There he made himself a shelter, sat in its shade and waited to see what would happen to the city. Then the Lord God provided a leafy plant and made it grow up over Jonah to give shade for his head to ease his discomfort, and Jonah was very happy about the plant. But at dawn the next day God provided a worm, which chewed the plant so that it withered. When the sun rose, God provided a scorching east wind, and the sun blazed on Jonah’s head so that he grew faint. He wanted to die, and said, “It would be better for me to die than to live.”

But God said to Jonah, “Is it right for you to be angry about the plant?”

But the Lord said, “You have been concerned about this plant, though you did not tend it or make it grow. It sprang up overnight and died overnight. And should I not have concern for the great city of Nineveh, in which there are more than a hundred and twenty thousand people who cannot tell their right hand from their left—and also many animals?”

Any parent reading this probably knows what I’m going to say: Does this not sound like a parent dealing with a child? I don’t know about y’all, but, HEAVENS! This is exactly me and my toddler, almost every day.

But… if I’m honest, it’s also probably me and God, almost every day. How frequently am I mad that God for not doing what seems right in my eyes? How often am I mad about the things God has provided for me, rather than thankful? Am I satisfied with God’s mercy and his justice and how He carries out both?

God was so patient with Jonah, and so merciful to him. God shows us here how He is the perfect parent who shows discipline and mercy to those “who cannot tell their right hand from their left,” and for those who know better. I am so thankful that His ways are not my ways, and that He is always teaching me with His word.